By Christine Menapace
Courtesy of Turf

Imagine if views of your facility’s turfgrass were broadcast to millions of viewers and had to be picture perfect—while also absorbing the impact of cleats and tackles from the famed Kansas City Chiefs football team. Did we forget to mention it’s also December in Missouri? And the field was just used for a sold-out concert and now requires a total transformation?

As Head Groundskeeper of GEHA Field at Arrowhead Stadium, Travis Hogan knows these challenges are just another’s day work. Yet last week he graciously let Turf magazine staff and a large group from the Turf and Ornamental Communicators Association (TOCA) trod on the same hallowed ground as Patrick Mahomes. 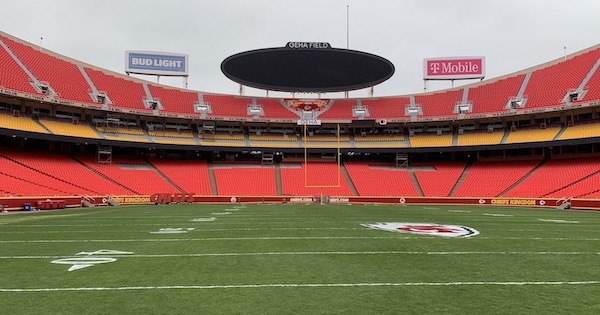 Hogan and his staff are responsible for the 87,000-square-foot field at Arrowhead Stadium as well as all practice fields. Each are planted in NorthBridge Bermudagrass from Sod Solutions. Hogan’s primary reasons for this choice, which has been used since 2013, include:

It’s not only cold that affects the grass quality. Hogan said temperature swings from -8˚F to 108˚ F can hit within a five to six month span. Fighting shade is another major issue.

But Hogan and his crew aren’t alone in the fight. A three-year project to install a $2.2 million heating system under the field was completed in the Spring of 2016. Thousands of feet of pipe were installed underneath the playing surface which snake back and forth from sideline to sideline at a depth of 9″ below the sand. Four-inch pipes run to the field from boilers that sit under the bleachers. Like a thermostat, the temperature of the field can be set as desired…

To read the rest of this article, visit Turf.