Members of the St. Louis Chapter of IFMA (International Facility Management Association) gathered to recognize two industry members and an outstanding commercial facility.
Held on Wednesday, June 22, at Orlando Gardens in suburban St. Louis, the awards were presented during the chapter’s celebration of National FM Day.

Started in 2008, FM Day underscores the value and contributions of facility managers in St. Louis and around the nation who ensure that commercial buildings provide a safe, healthy, and productive environment.

Montgomery’s career spans nearly two decades in facility management. He oversees the design and construction for new projects and renovations at the university. His projects include several key additions to Saint Louis University: Grand Halll, Spring Hall, New Jesuit Hall, Macelwane Hall, Interdisciplinary Science and Engineering Hall, Monsanto Hall and Koenig Plaza. He currently is overseeing the O’Laughlin Family Champions Center, which is expected to open in May 2023.

LaBruyere has made significant contributions to the chapter. She served as the Programs Chair, organizing and scheduling monthly programs to advance members’ knowledge and provide networking opportunities. She recently was elected to serve as secretary on the chapter’s board.

Located on 15 acres in the heart of St. Louis, the Lawrence Group transformed the former century-old manufacturing facility into a mixed-use development. The $200 million first phase now boasts its centerpiece food hall, as well as retail, entertainment, and office space. The award was presented to Rob Soete, General Manager of City Foundry STL. 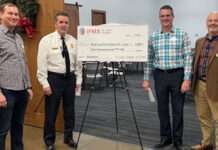 IFMA St. Louis Shares The Warmth Of The Season