LHC Group, the largest home health care company in the U.S., collaborated with Chase Marshall Architects to design a consolidated campus. The expanding company was rapidly outgrowing its 66,000 sq. ft. main headquarters, with an additional five or six locations scattered around the city of Lafayette, LA. The new campus, completed in May 2022, will help LHC improve overall efficiency while attracting and retaining new employees.

The 200,000 sq. ft. addition includes office spaces, conference centers, training facilities, a cafeteria, and a pharmacy. As an addition to the original building, architects were constrained by pre-constructed floor heights for these new facilities. This created some unique lighting challenges.

In the employee dining space, with a floating ceiling height of only 12 ft. 9 in., the goal was to make the room look and feel as tall as possible. Designers decided not to crowd the room with multiple light fixtures suspended from the ceiling or affixed to the wall, and instead used A-Light D5 recessed linear luminaires in custom rectangles to provide a clean accent in the space.

Custom D5 recessed rectangles were selected for the three-story atrium and stairwell. They, too, would have been similarly inserted into a cloud ceiling. However, as construction progressed, it was discovered that this dropped ceiling conflicted with one of the safety systems. Chase troubleshooted with the A-Light team to find a plan B. With the addition of mounting brackets, they were able to retrofit the recessed luminaires to create dramatic pendants suspended along the industrial ceiling.

D5 recessed fixtures are also used in office corridors throughout the building. The minimalist lines of light are a subtle wayfinding cue as employees move through the building.

LHC Group’s executive floor features rich wood paneling and stylish amenities. The D5 recessed luminaires provide lines of light in the dropped wood ceiling over reception. In addition to providing illumination to the waiting area, they also serve to define the executive space.

An adjacent corridor with high industrial ceilings required a different approach to lighting. Acoustic panels for sound absorption are interspersed with pendant lights that are consistent with the lighting design in other areas of the facility. However, the space did not benefit from overflow light from neighboring offices, as on other floors, resulting in a darker atmosphere.

The luminaire also provides the primary illumination for the new high-tech training room. The space is equipped with state-of-the-art cameras and audio equipment to enable presentations to be broadcast to every computer in the LHC network. But with an acoustical ceiling of only 9 ft., anything suspended would interfere with the AV. Minimizing glare was also a concern, as employees and guests in the room are often interacting with laptops and tablets.

Chase chose to use A-Light’s Apex 5 recessed luminaire. As with the Apex 3, its LED technology features a compact optical system to control and channel the light source. Lighting specifications were also modified for the boardrooms and ‘huddle rooms’ to include the recessed fixtures in the dropped ceilings.

All lighting is on daylight sensors and managed with a lighting controls system, giving LHC employees the ability to control of their lighting usage throughout the day. 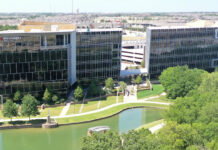