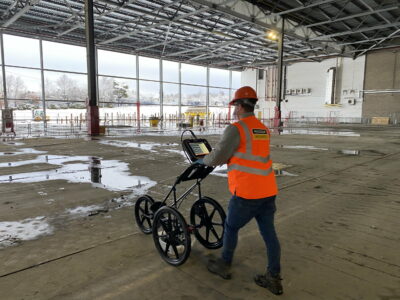 As the saying goes, “time is money,” and general contractors, superintendents, and project managers know that the cliché means focusing on keeping workflow going as smoothly as possible. Like a conductor of a symphony, general contractors make sure each trade “chimes in” when needed—not before or after. Especially in the construction world, the general contractor’s role is to keep the pieces (mechanical, electrical, and plumbing contractors, concrete, framers, fire and sprinkler, drywallers, and steel contractors) working together in harmony. Giving construction crews ground penetrating radar (GPR) systems helps enhance the safety and efficiency of the job site.

Many factors can reduce construction efficiency

Construction efficiency can be affected by several factors. There can be breakdowns in timing due to shipment delays. Did a plumbing sleeve get knocked out of place during the pour? Are steel pieces needed to weld framing together and need to be covered by concrete? While these issues are being sorted out, there is often a domino effect with multiple contractors—even one or two minor issues can result in a cascading delay for the site.

Data sharing on the construction site 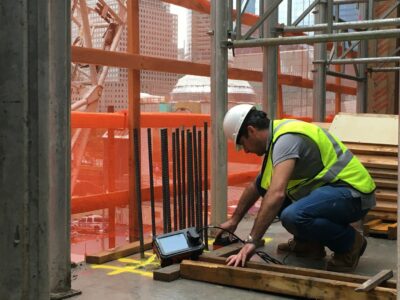 While construction cultures do tend to vary by region, it is not uncommon to see superintendents, assistants, project managers, and engineers walking around with ToughPad tablets connected wirelessly, giving them real-time access to individual plans, schedules, and drawings. Imagine standing on the 30th floor of a high-rise and being able to pull as-builts on a screen rather than having to walk to a construction office that may or may not be in the building.

Different manufacturers are bringing in tools to digitize space and drawings. For example, if the fire sprinkler pipes are mistakenly placed in the same location as plumbing lines, those with tablets can share the conflict with CAD engineers and get it resolved much more easily. Being able to upload the GPR data to the company’s server and share it with engineers who have to make decisions on whether it is clear for drilling is a time and money saver. Without this information, they would have to go to the office, print out the data and drive it somewhere—adding steps, time, and costing more money.

On the horizon is an increase in cloud-based sharing of information along all levels of the construction process, from data collection to the decision makers (engineers, project managers) and down to the trades doing the work (electricians, plumbers, mechanicals). This even extends to GIS-based data making its way to excavators clearing ground for the beginning of a project.

GPR is almost always needed when something unexpected occurs. It is rarely something planned out in the construction cycle. So how can contractors keep unplanned events from adversely affecting the construction schedule? One way is to give general contractors access to GPR equipment on each job site. Many trades and general contractors are bringing in units to keep on hand, so a simple problem can be fixed quickly.
Newer equipment feature user-friendly interfaces, easy enough that someone who does not “do GPR for a living” can take the tool out and use it for clearing an area, double checking to see if possibly a sleeve has been forgotten—or to make sure concrete drillers are not going to hit anything. This can be done relatively easily, with manufacturer’s training and a bit of experience. (It should be noted that GPR service providers will always have a place; some areas are so complicated that having years of experience is necessary.)

Take a recent example of a tower crane being used for support during the construction of a high-rise building in Austin, TX. The crane anchors affixed to different floors started breaking, presenting a significant safety issue as there was a public street below and the new construction was surrounded by occupied buildings. The job came to a halt when it was discovered; GPR was used to verify damage and indicate areas for new anchors, and the job could start up again without further delay.

Another example was a utility company that was conducting horizontal boring for installation of a fiber optic cable. A horizontal boring company used 811 to mark out utilities based on use of as-builts. Unfortunately, an unmarked water line was cut while laying the fiber optic cable. The contractor had two out of town crews standing by waiting for the water line to be located for the entire apartment complex. This is a case where on-site GPR could have verified the utility markings simply and quickly before the issue arose.
This method of locating is very frequently an issue in remodeling jobs. GPR may be built into the planning process, but usually a crew will start saw cutting—and when they hit a conduit that crew goes on standby, charging standby rates until GPR can be brought in to verify where it is safe to cut. 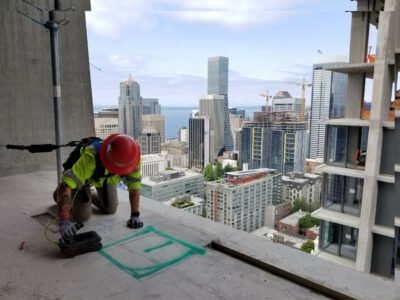 Another option is the GSSI UtilityScan GPR system, with a simple user interface that makes it easy to locate and mark the depth of underground utilities in real-time in the field. The on-screen 3D data collection mode allows users to easily define the time slice depth and thickness in the field with the 3D data on the screen.

The future of GPR tools focuses on improving data flow

Construction personnel can save time and money now by maintaining simple GPR tools on-site. All eyes are looking toward how quickly one can eliminate or reduce the dead time between collection of data and sharing it—so we can get the trades back to their work.