Fire, police, and EMS frequencies vary across the country. To increase safety and compliance, the specific radio frequency used must be customized to the stadium configuration, the frequencies used by emergency services specifically in the area, and the geographic topography (nearby hills, mountains, etc.). The design usually involves tuning the ERCES to prevent signal interference with other frequencies and avoid running afoul of the FCC, which can levy significant fines when violations occur.

To streamline the process, Bone selected the Fiplex by Honeywell BDA and fiber DAS system.

The compliant, FCC-certified system was developed to reliably provide superior RF amplification and coverage without noise, enhancing two-way radio signal strength inside buildings including stadiums. The system is specifically designed to meet NFPA and IBC/IFC code compliance with the UL 2524 Second Edition listing.

One vital aspect that sets the Fiplex ERCES apart is that Fiplex can “tune” the device to the channels used before shipping. The installer can further optimize the BDA’s RF tuning onsite to achieve the precise frequency required with channel selective, software programmable or adjustable bandwidths. This mitigates the issue of wideband transmission, which can otherwise cause outside interference in highly congested RF environments like stadiums and potentially lead to FCC fines.

Bone points out another aspect that distinguishes Fiplex BDAs from other digital signal boosters: the availability of a dual-band option for dedicated UHF or VHF models.

“One of the best features of the system is that it can incorporate both UHF and VHF in one unit, which saves space and simplifies installation. Previously, I had to purchase separate units,” says Bone.

“My customers cannot wait eight weeks, let alone 18 to 20 weeks, for an amplifier. Although this happens in the industry, I don’t have that problem with Fiplex. They coordinate with us so we always have a ready supply,” says Bone.

Bone appreciates how the ERCES system enhances design flexibility. This can be particularly important after a stadium project is complete if modifications are made or a certain material is denser and more prone to blocking RF signals than originally believed.

“With a BDA software upgrade, I can change the amplifier from a half-watt to a two-watt BDA. That flexibility is key because it allows easy adjustment, so I don’t need to purchase and install another amplifier if a structure is denser than I thought,” says Bone.

Additionally, the compact size of the BDA eases installation. “Fiplex’s BDA is much smaller than the industry norm, and has its own mounting bracket, which streamlines field installation.” He notes that the system’s DAS and fiber components are much easier to install than the equipment he previously used.

For Bone, installing a reliable system that works as expected is the most important aspect of any project.

“When there’s an incident at a stadium, like an injured player who is taken off the field by ambulance, it is a communications frenzy with RF signals flying everywhere – which is tough on an ERCES system, but if you are installing a quality system, then everything is okay,” says Bone.

This was put to the test when the final sign-off by the AHJ (Authority Having Jurisdiction) was the day of the first game, due to tight timelines for stadium completion. 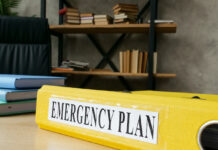 The majority of public schools have a written plan in place for a pandemic disease, as well as active shooter situations, natural disasters, and suicide threats or incidents.
Read more…

The inspection went off without a hitch and the fire marshal signed off on the ERCES.

To avoid delays and technical challenges, stadium developers, architects, and engineering firms can benefit from an expert contractor’s familiarity with ERCES requirements. With quick shipment of an advanced ERCES tuned by the manufacturer to the required RF channel, a skilled contractor can install and further optimize the device to the specific local band frequencies. The approach expedites the project and compliance, enhancing safety during an emergency.

Del Williams is a Technical Writer who lives in Torrance, CA. 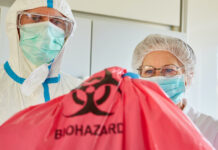