The remote work model has become the norm for millions of workers across the country.  Every day, Americans travel with their laptops at the ready, squeezing in a few hours of work whenever and wherever they have some downtime. Of course, some airports are more welcoming to remote workers than others, and the savvy traveler (and employee) will benefit from knowing which airports to use. With that in mind, Upgraded Points’ conducted a recent study to analyze “The Best Airports in the U.S. For Remote Workers.”¹

“Even though the travel industry has been more accommodating to remote work for a while now, the flood of new remote workers is forcing airports to reconsider how they address this need on a daily basis,” said Alex Miller, Founder, Upgraded Points. “Most remote workers have learned to be agile, setting up their stations wherever they can. That’s why we were curious to see which airports are really laying out the red carpet for remote work, and which airports are still falling short.”

So which airport is the best for working remotely?

Other airports stood out for notable working perks:

Looking for all stats on a particular airport? Check out the complete results, along with detailed ranking factors and graphics and an interactive table of all 45 airports featured. 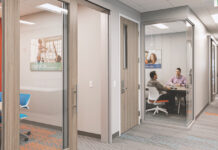