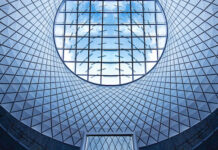 Construction & Retrofits March 16, 2016
Designed as a demonstration of an environmentally responsible 21st century rail transit center, the MTA's Fulton Center is the first subway hub in New York to achieve a LEED® rating.

Energy Management & Lighting February 13, 2012
As a manager of water resources for the federal government, the Bureau of Reclamation incorporates efficiency into its new Boulder City, NV office.

Tricks Of The Trade: Following Up On HVAC Trends

Ask The Expert October 23, 2011
TFM Columnist Jim Elledge assists a graduate student in need of the latest information on cutting edge HVAC technologies. Former Tricks Columnist Elledge, facility/office services manager for Dallas, TX-based Summit Alliance Companies, is the recipient of the Distinguished Author Award from the International Facility Management Association (IFMA), is an IFMA Fellow, and is a member of TFM’s Editorial Advisory Board.

Update On Cash Grants For PV Systems In 2011

Construction & Retrofits December 13, 2010
Until the end of 2010, qualified businesses can participate in the American Recovery & Reinvestment Act of 2009 (ARRA) which provides a cash rebate of 30% of the cost of a solar-produced (renewable) energy system. The rebate generally comes within 60 days following completion of the system installation.

Energy Management & Lighting May 13, 2010
Congress is being urged to develop legislation that provides benefits and opportunities for public power to receive comparable incentives for renewable energy projects.

Energy Management & Lighting December 11, 2009
In an effort to clarify how ARRA funding ties to state energy code adoption and enforcement, 14 organizations have developed an explanatory statement in order to clarify for state and local governments.