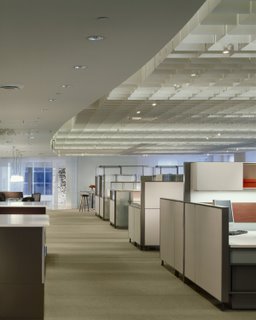 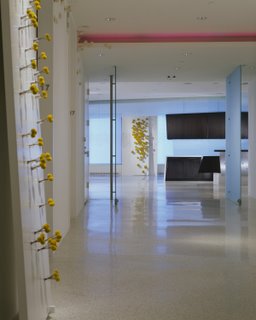 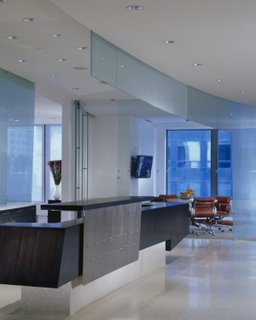 Overall, the 15,400-square-foot facility received 37 credit points from the USGBC, most notably for its water conservation, energy efficiency, and environmentally responsible materials. Herman Miller’s newly relocated National Design Center occupies the 17th floor of a midtown Manhattan tower at 1177 Avenue of the Americas.

“This project has tremendous synergy with the environmental initiatives occurring in New York,” said Rico Cedro, director of sustainable design for architects Krueck and Sexton. “Carbon dioxide emissions and water conservation are issues of regional, city, and state importance.We wanted the National Design Center (NDC) to demonstrate leadership in these areas.”

The facility features low-flow fixtures that reduce water use by 37%, and 100% of the electric power is obtained from certified renewable energy sources. “Indoor air quality is also an important issue,” Cedro added. “A typical American spends over 90% of his or her time indoors, and a large proportion of that time is spent at work. The New York NDC maximizes indoor air quality through its advanced HVAC system design, materials with low-emitting or zero-emitting VOCs (volatile organic compounds), and its Greenguard-certified Herman Miller seating and systems furniture.”

The space was designed to allow customers, architects, and designers to see and experience the array of choices offered by Herman Miller. It also houses Herman Miller’s New York sales team. “We want our customers to be inspired by this facility,” said Ray Kennedy, director of corporate merchandising, who oversees the development of Herman Miller’s National Design Centers. “Over 20% of the project’s material value is recycled content, and approximately 83% of the discarded construction material was recovered and recycled. We believe these steps underscore our ongoing commitment to sustainable design and environmental stewardship.”

May 29, 2020
Tweets Brought To You By:
Tweets by facilityexec

Safety June 1, 2020
WorkWell is an ecosystem of prefabricated components designed to allow employers, schools, venues, airports, and public spaces to screen large groups of entrants for signs of infectious disease.

Safety May 29, 2020
Perdue Farms recently gave the CDC a tour of its Accomac, VA poultry processing facility to share the safety measures the company implemented to protect its workers from COVID-19.

Did You Miss “The Business Case For Smart Waste Technology” Webinar?

Webinars May 28, 2020
View this free video webinar as we discuss the advantages for using smart technology to better manage your waste operation.

Restrooms & Plumbing May 27, 2020
In response to the COVID-19 pandemic, here are several considerations for keeping restrooms clean, maintained, well-equipped and prepared for a healthy hand washing experience.

COVID-19: How To Disinfect Your Buildings According To CDC and EPA Guidelines

Cleaning & Maintenance May 25, 2020
Cleaning procedures can reassure occupants that your spaces have been properly disinfected to eliminate COVID-19 and other contagions. Here’s the easiest way to standardize your organization’s cleaning processes and enable a safer return for everyone in your facilities.