Following a drop of almost a full point in June, the Architecture Billings Index (ABI) fell again by more than a point in July. As a leading economic indicator of construction activity, the ABI reflects the approximate nine to 12 month lag time between architecture billings and construction spending.

The American Institute of Architects (AIA) reported the July ABI score was 45.1—the steepest decline in billings since February 2010—after a reading of 46.3 the previous month. This score reflects a continued decrease in demand for design services (any score above 50 indicates an increase in billings). The new projects inquiry index was 53.7, a considerable slowdown from a reading of 58.1 in June.
“Business conditions for architecture firms have turned down sharply,” said AIA Chief Economist Kermit Baker, PhD, Hon. AIA. “Late last year and in the first couple of months of this year there was a sense that we were slowly pulling out of the downturn, but now the concern is that we haven’t yet reached the bottom of the cycle. Current high levels of uncertainly in the economy don’t point to an immediate turnaround.”

The Architecture Billings Index (ABI), produced by the AIA Economics & Market Research Groupeconomic indicator that provides a glimpse into the future of nonresidential construction spending activity. The diffusion indexes contained in the full report are derived from a monthly “Work-on-the-Boards” survey that is sent to a panel of AIA member-owned firms. Participants are asked whether their billings increased, decreased, or stayed the same in the month that just ended as compared to the prior month, and the results are then compiled into the ABI. These monthly results are also seasonally adjusted to allow for comparison to prior months.

The monthly ABI index scores are centered around 50, with scores above 50 indicating an aggregate increase in billings, and scores below 50 indicating a decline. The regional and sector data are formulated using a three-month moving average. More information on the ABI and the analysis of its relationship to construction activity can be found in the white paper, Architecture Billings as a Leading Indicator of Construction: Analysis of the Relationship Between a Billings Index and Construction Spending on the AIA web site. 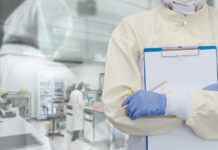 The Future Of Pharmaceutical Facilities 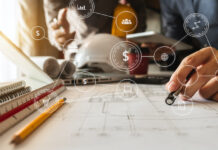