Office workers average more than three hours a day on manual, repetitive computer tasks which aren’t part of their primary job and are ripe for human error, according to a global study commissioned by Automation Anywhere.

More than 10,000 office workers in nearly a dozen countries were surveyed to investigate the time spent on and attitudes towards manual, repetitive digital administration tasks in the modern enterprise. Nearly half of workers surveyed who expressed an opinion find digital administration boring (47%) and a poor use of their skills (48%), while the majority say it gets in the way of doing their main job (51% overall, rising to 80% in India) and reduces their overall productivity (64%). More than half (52%) of millennial respondents felt that they could be more productive if they had less administrative tasks to complete, slightly higher than the average at 48%.

“There was a time not so long ago when workplace technology was viewed as liberating,” said Shelly Kramer, Principal Analyst, Futurum Research. “The PC age freed office workers from rigid processes, placing each of us in control of our own workflow. But there’s been a trade-off, and today, those tasks have become a significant burden. If you work in an office, likely your productivity and happiness are significantly undermined with having to be responsible for manual computer administration tasks that could easily be automated and eat into your day.” 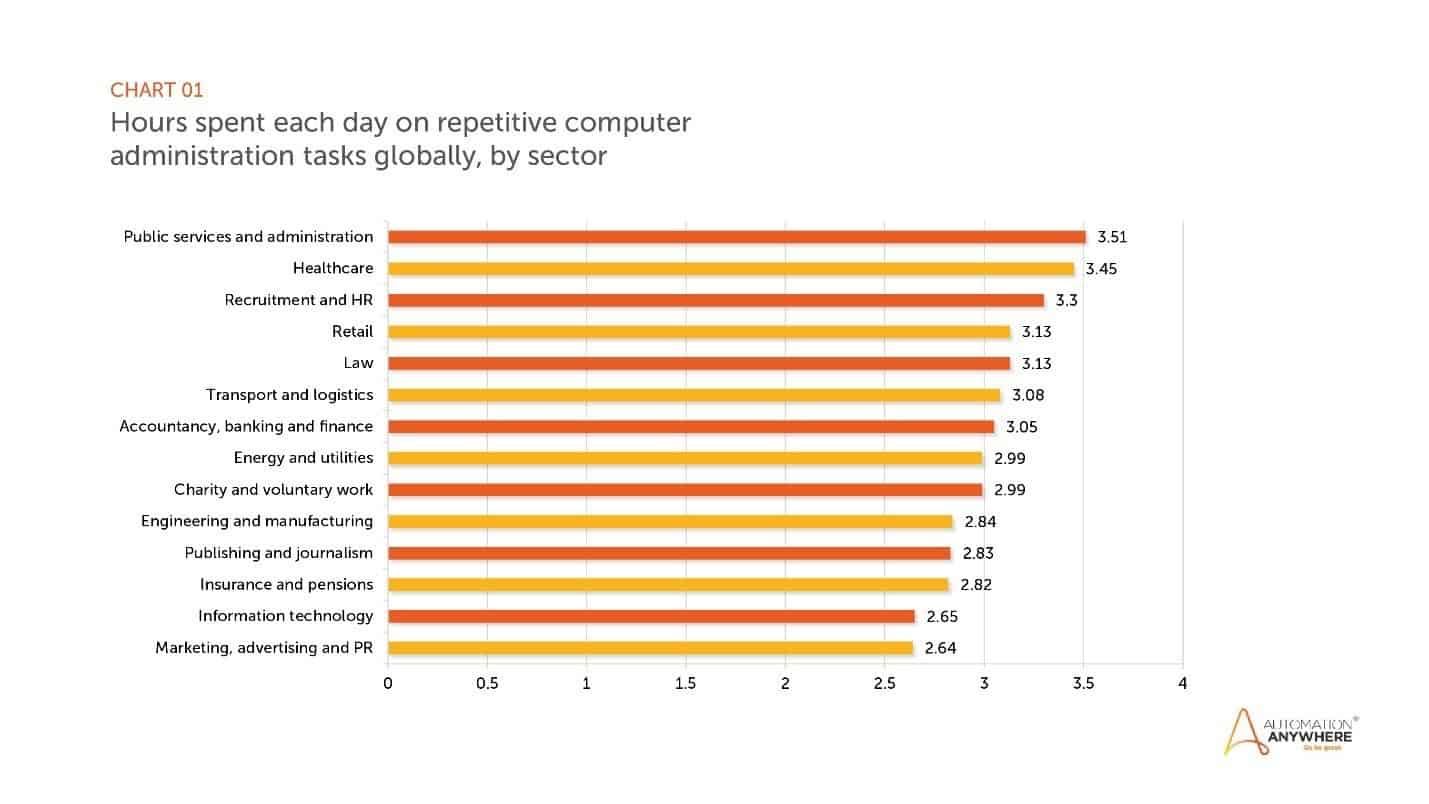 At the very top of the hated task heap is general data entry – manually inputting data into a computer or other devices, followed closely by managing email traffic and filing digital documents – such as documents, spreadsheets, images, or PDFs – into the correct digital folder. Compiling reports from IT and software systems and invoice management round out the top five most hated tasks.

The survey revealed that the top three most hated tasks are also the top three administrative tasks workers report that they spend the most time on every day. This despite the fact that there are now hundreds of software robots (bots) that can perform many of these manual office tasks.

Today, more than 700 bots are available in the Automation Anywhere Bot Store that address many of the survey’s most hated tasks and reduce the amount of time organizations spend on them. With an 8-hour workday being the global norm, according to the survey the average employee loses 60 hours per month to easily automatable tasks. By deploying a digital workforce and automating these repetitive tasks employees could be given back a quarter of their annual work time (4.5 months) to focus on more meaningful work, boosting productivity and overall business value.

The research also focuses on the impact on employee happiness that extends beyond the office. Nearly half (49%) of those surveyed say that simple digital administrative tasks often prevent them from leaving the office on time, indicating it’s impacting their personal lives. This is a bigger problem for male workers, as 54% of men struggle to leave work on time, compared to 43% of female workers, and is especially prevalent in the UK and Singapore, according to the research. 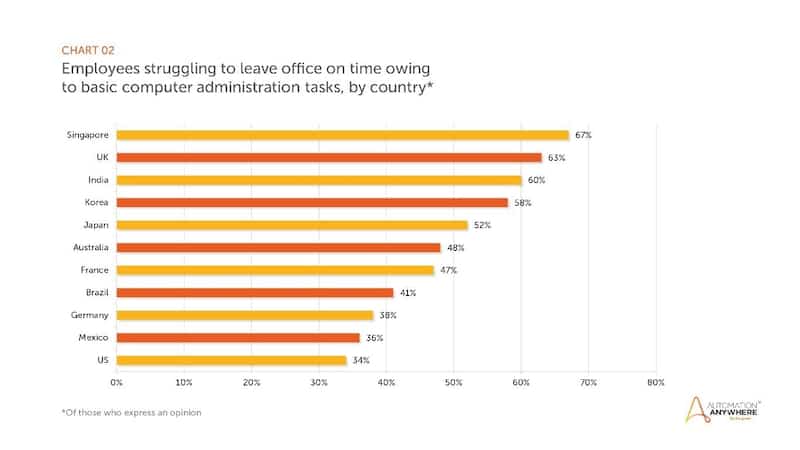 Digital administration overall, however, disproportionately affects women – who on average clock 3.4 hours each day on these “hated” manual tasks, compared to 2.8 hours for men. U.S. employees average 2.9 hours per day, and in Brazil, Korea and Mexico, it rises to over 3.5 hours each day, overall. This number is matched by public sector workers across all countries surveyed, showing public services to be the most administration-heavy sector. Employee desires in this regard are highlighted in the survey with 69% of public sector respondents calling for automation technology that can better manage itself without so much manual input.

Almost all of those surveyed said they believe that automation could easily eliminate manual, repetitive digital office tasks that aren’t core to their job (85%) and anticipate they’d be happier with the change (88%). With the freed-up time, workers say they’d be able to perform their primary job better, improve productivity within their department, and seek opportunities to learn new skills.

The overwhelming majority (87%) of office workers who expressed an opinion would like their employers to automate more manual repetitive business processes. More than half (55%) said they would consider leaving a job if this manual administrative load became too high, while 85% would be attracted to work at a company that invested in automation to reduce repetitive digital administration tasks.

“The research is clear. Worker productivity and morale are negatively impacted by the volume of repetitive manual business processes that characterize their workday,” said Stephen DeWitt, Chief Strategy Officer at Automation Anywhere. “Freeing workers to focus on higher value tasks is the fundamental promise of a digital workforce. Companies embracing this immediately derive a competitive edge in worker productivity and a huge boost in the ability to attract and retain their valuable talent.”

Want to learn more about productivity and facility management topics?

Looking for updates? Check out all the latest facility management news related to productivity and workplace culture. 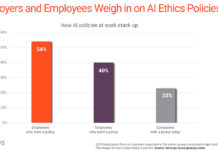 Most Employers Aren’t Worried About Unethical Use Of AI: Should They Be?