Published in the December 2008 issue of Today’s Facility Manager

In the article, readers were invited to offer advice and suggestions or submit additional questions to Watson, our investigator, in his quest to solve the mold problem. The October column concluded with Watson approaching the cottage in question for the first time, armed with only those few facts.

Let’s resume the investigation, aided by these suggestions from readers:

A few other anonymous “virtual detective” tips for Watson included:

Recommendation. Disconnect broken attic exhaust fan, and cut a ridge vent into the roof. This would be more reliable than powered exhaust and requires no electricity.

Recommendation. Install appropriate vapor barrier over ground in the crawl space and adjust property’s grading to divert rain around foundation. If that’s impossible, consider installing a gravel trench and sump pump and/or a permanent dehumidifier in the crawl space after sealing up vents. Ask mold abatement firm for assessment of crawl space to determine the best options for removing mold.

Recommendation. Replace wax ring on toilet along with damaged flooring.

Recommendation. Hire a mechanical engineer to run load calculations on cottage to confirm heat pump size and placement of supply/return diffusers. The current unit is probably too large for the cottage, and if it is “short cycling” (running for very short periods of time), that would help explain the excess humidity, high dew points, and inadequate circulation inside building. Replace HVAC system if engineer determines it is oversized.

Recommendation. Ask a qualified carpenter if ceiling planks can be properly adjusted/sealed, or find out if the entire ceiling must be replaced.

Additional general recommendations. Place portable dehumidifier in cottage to dry out interior while repairs are in progress. Then monitor temperature/humidity for at least one year (visually inspect attic and crawl space quarterly) to confirm problems are all resolved. Finally, hire a competent facility manager (and a different general contractor) to manage construction and operation of additional facilities! Finally, thanks to all the TFM readers who offered such great feedback. 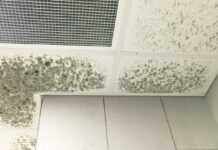 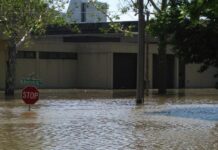 Flood Clean Up Tips From IICRC

Question of the Week: What Happens During Mold Remediation?