Those attending the 2012 opening day game this afternoon will enjoy food, beverage, and retail shops powered by 106 solar panels, which are expected to produce about 32,000 kilowatt hours of energy annually.

The Cardinals have partnered with Microgrid Energy, the Electrical Connection, and Sachs Electric to bring solar energy to Busch Stadium. “This is all part of the St. Louis Cardinals’ commitment to green its game,” said Joe Abernathy, vice president, stadium operations. “Since the stadium opened in 2006, we’ve been able to cut our energy use by 20 percent and water use by 10 percent.”

In September 2007, TFM discussed the stadium’s design with Abernathy for the article, “One For The Team”.

“We were excited to work with the world champion St. Louis Cardinals on this project, not only because they are a cornerstone in St. Louis, but also because the solar installation has the potential to have such a far reaching impact in terms of educating and increasing awareness of solar energy,” said Microgrid CEO, Rick Hunter

The two solar arrays are located on the roof of the ticket building on Clark Street and atop a canopy in the left centerfield bleachers at the Ford Family Plaza. To raise awareness of solar energy, an educational kiosk providing information about the project and solar energy in general is being installed in Ford Family Plaza.

Jim Curran, executive vice president of the Electrical Connection, said, “We are proud to team with the Cardinals, Microgrid Energy and Sachs Electric to introduce solar energy to Busch Stadium for the first time.” The Electrical Connection is a partnership of the International Brotherhood of Electrical Workers (IBEW) Local One and the St. Louis Chapter, National Electrical Contractors Association (NECA).

The two solar arrays, manufactured by Schott Solar in the U.S., produce electricity that feeds into the stadium’s electrical distribution system and mixes with the power from the grid for use throughout the stadium. There are no batteries and all the energy produced is used in the stadium. The solar energy will offset the grid power used by stadium operations, reducing electrical bills. Although the offset is a relatively small percentage of the stadium’s power use, it will result in a large amount of savings over the life of the system.

“Sachs Electric has served the Cardinals for more than 70 years, including the floodlighting and electronic scoreboard at Sportsman’s Park for the first night game ever played in St. Louis.” said Joe Barnard, vice president at Sachs Electric. “It’s a pleasure to help the Cardinals usher in a new era of renewable energy in a form that educates the public as well.”

The Cardinals will be celebrating “Solar Day” at Busch Stadium at a home game on April 29 with a variety of related activities and events throughout the day. 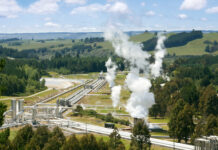