AzaGuard® from BioSafe Systems is a 3% Azadirachtin formulated Insect Growth Regulator (IGR) that offers broad spectrum insecticidal control on over 300 insect species. It prevents molting between larval, pupal, and nymphal stages (interferes with the synthesis of ecdysone) reducing insect infestations in and around a facility. 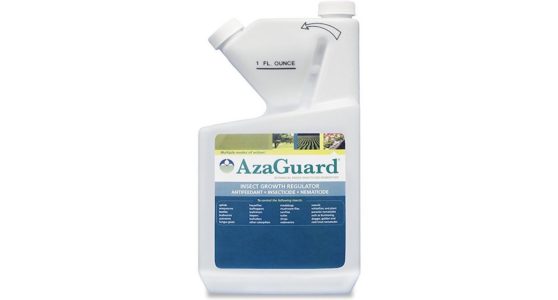 AzaGuard’s natural botanical formula meets all of the requirements of the National Organic Program (NOP), and is an important tool in Integrated Pest Management (IPM) and sustainable disease control programs.

AzaGuard’s primary active ingredient, Azadirachtin, is a chemical compound belonging to the liminoid group and formulated through an extraction process of the neem tree, mainly from the seeds that yield the purest form of the neem extract. AzaGuard’s raw neem oil extract is then put through a complex biosynthesis to create a concentrated, high-grade Azadirachtin formula that yields a higher percentage of critical limonoid components including nimbin, nimbidinin, and salannin.

AzaGuard Insecticide/Nematicide is a versatile IPM tool that allows for field application on more than 150 different fruit and vegetable crops while also being labeled for greenhouse ornamental applications. The insect growth regulator is most commonly applied in a foliar insecticide program and can be rotated and/or tank-mixed with other synthetic and botanical insecticides. For soil applications AzaGuard can be drenched into the soil profile, as well as chemigated directly through drip irrigation systems to control various subterranean root herbivores. AzaGuard is labeled to be applied through high and low volume sprayers, fogging applications, aerial applicators, and chemigated through various irrigation systems.

AzaGuard controls insects such as mealybugs, thrips, beetles, sawflies, and plant parasitic nematodes that include burrowing, dagger, golden, and root knot nematodes. As an insect growth regulator it does not control adult insects.